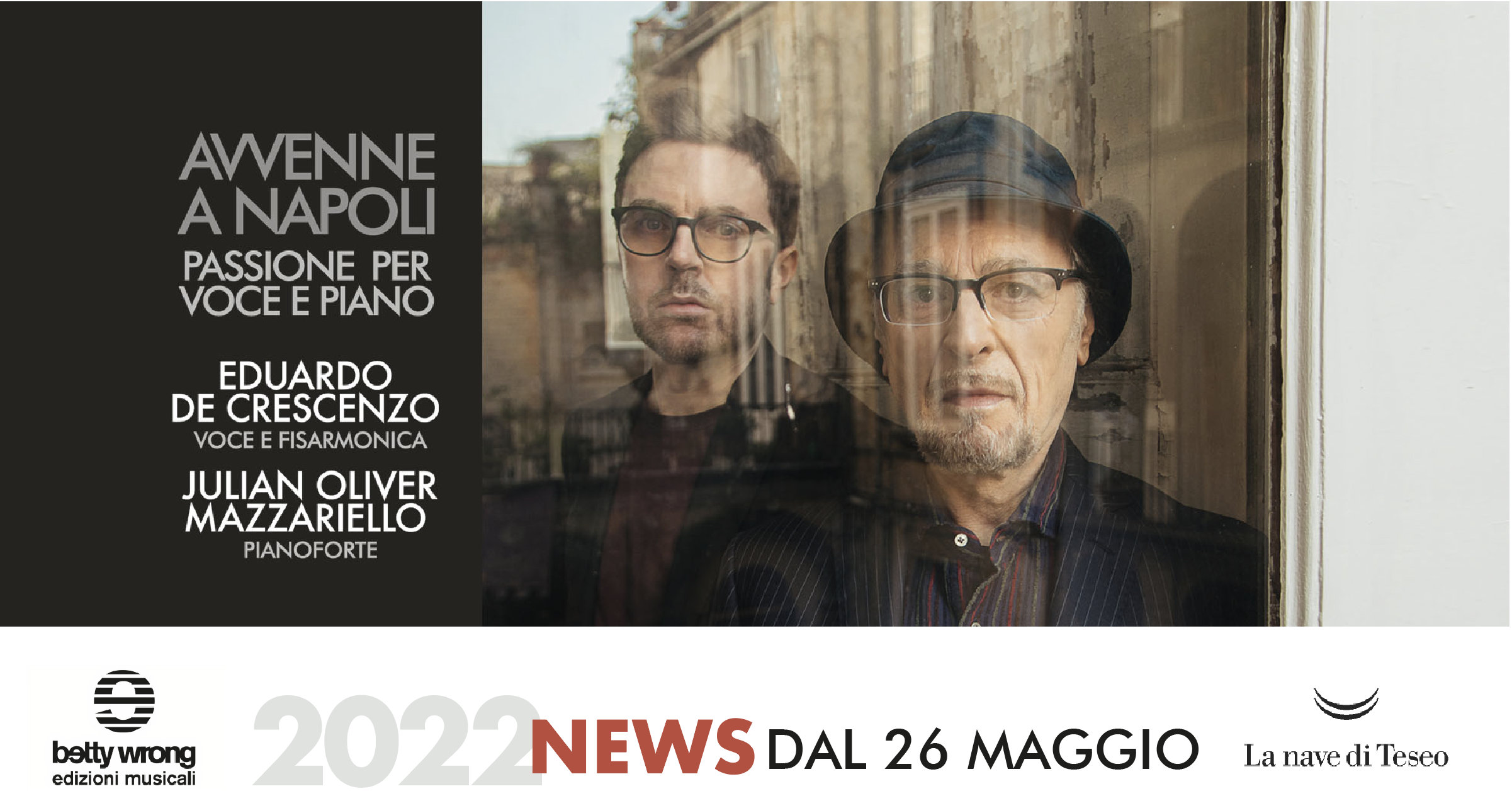 The CD “AVVENNE A NAPOLI passione per voce e piano” is released on May 26th with 20 songs among the most prestigious of the repertoire, from the iconic voice of Eduardo De Crescenzo and the eurocentric piano by Julian Oliver Mazzariello. In the box set the BOOK by Federico Vacalebre, “Le Storie del Canzoniere Napoletano” introduced by Eduardo De Crescenzo.
Published and distributed by the record label Betty Wrong music editions of Elisabetta Sgarbi, in collaboration with La nave di Teseo

It is my homage to the Masters who taught me the Art of Feelings: because emotions have a precise sound, they have precise words but to recognize them, you must learn them.

I was born in Naples in 1951. For those of my generation it was like drinking from a magical spring. That extraordinary period between the 19th century and the 1900s or thereabouts – which had gathered the knowledge of so many poets and musicians on a genre that we define as “Classical Neapolitan Songs” – was already at dusk but strong and alive were the emotions that it had left imprinted in the hearts of men. Those songs had been in the youth of our parents, had educated and inflamed their loves, had comforted their adolescence torn by the war. Our mothers sang them as they rocked us or to comfort us after a desperate cry. For me, it was like living immersed in an open-air theater where I could read the roots of my life at any moment of the day. When at the age of only three I had a toy accordion in my hands, it was natural to play by ear the only repertoire I knew, and I certainly was not aware that I was attending a school of life that would influence my whole future. Then the music around began to change with the war came the Americans with jazz and rock which in Naples became Renato Carosone; at home, Uncle Vincenzo, my father’s brother, writes the verses of “Luna rossa” but Vian’r music is already an African- American inspired beguine. I too have walked in the contaminated sounds of my time but “that invisible guide” has always been at my side, like a loving and wise teacher who is now part of your thinking.

The songs of this fruitful artistic period are love songs – after all, at the time it would have been difficult and risky to say anything else – but they provoked a social revolution until then unpublished: never art, in any previous time, had left the intellectual circles and the educated salons to be acclaimed even by the people with such sincere transport. Not always the artists who created them were Neapolitans but AVVENNE A NAPOLI who designed a “culture of feeling” in which still identifies a high model of humanity, still today a desirable reference point.
Over time, I will listen many times to the rare recordings survived in scratched and dilapidated records: the magical interpretations of Gennaro Pasquariello, those masterful of Francesco Albanese, the most famous and passionate of Enrico Caruso … I will understand from them that beyond every technique, every talent, every vocal extension, the song is an expression of life that passes within; that “certain notes” are not to be found in the “throat” because they will never be there if we have not lived them and if our heart has not understood them. The extraordinary and planetary success of this repertoire with which the greatest singers in the world have measured themselves, should be exhaustive in giving it the right glory and yet it is not so! Even today, and even more so in the cultural confusion of our time, there remains a mixture of history and popular legend that confuses, offends, disfigures and plunders improperly these enlightened and enlightened artists. We owe to them the “song form” as it is still practiced in modern music; we owe to them the birth of “the interpreter” that evolves the operatic singing set by the schools of the time so that the singer designs and revives in the voice the emotions of the poet; we owe to them the poignant elegance of sentiments that is generated in the hearts of men when the melody of an exalted musician crosses the verses of a supreme poet: Fenesta vascia, Era de maggio, Luna nova, A vucchella, I’ te vurria vasa’, Uocchie c’arraggiunate, Voce ‘e notte, Passione, Serenata napulitana, Silenzio cantatore, Maria Mari’…

I am sitting in a pub in the province, one of the narrow ones, with little space and little air; it is not the best but, it must be said, it is one of those places where it is still possible to listen to good music. Julian Oliver Mazzariello is playing tonight. I love his Anglo-Italian piano, refined and brilliant; I like to hear it on stage while we play my music together but also go and listen to it when he plays his. During the concert, after a valuable and complex prelude, I recognize the melody of “Accarezzame” a Neapolitan song (text by Nisa, music by Pino Calvi) published in 1955.
He was not even born yet. It will be born in 1978 in Welwyn Garden City in Hertfordshire, a few kilometers from London, immersed in a culture a thousand miles away from ours. Ours will know her in late adolescence and falls in love with her, to the point that she decides to make her own, to move to Campania, where she still lives, in Cava De’ Tirreni. I am surprised by his performance: he sounds more of the world. His piano technique is original, international, but the emotion he spreads does not seem to come from his agile hands, it seems to come from other places: it’s Neapolitan!

… When I come home, I am still immersed in those atmospheres … I feel the emotions of those poets, of those musicians, of those performers who created them. I would like to sing them as they have heard them, careful only to sculpt the life that passes inside, naturally rebellious to any conventional mannerism. It’s my homage to the Masters who taught me the Art of Feeling: because emotions have a precise sound, they have precise words but, to recognize them, you have to learn them.

“AVVENNE A NAPOLI passion for voce and piano” is a concert suspended between the best Italian tradition and innovation. Eduardo De Crescenzo, already an icon of elegance, already an expression of modern classicism, interprets for the first time LA CANZONE CLASSICA NAPOLETANA (The classic Neapolitan song) of the period widely indicated between 1800 and 1950. Fenesta vascia, Era de Maggio, Luna nova, ‘A vucchella, I’ te vurria vasa’, Uocchie c’arraggiunate, Voce ‘e notte, Passione, Serenata napulitana, Silenzio cantatore, Maria Mari’… they are pearls of the repertoire that formed him, albeit in the evolution of his musical personality, of that “unique” style that makes him a recognizable artist, a recognizable Neapolitan.
A concert to tell the new generations a miracle HAPPENED IN NAPLES (AVVENNE A NAPOLI), when valuable musicians and great poets intertwined their talents and the singing became “Art”. They created a repertoire, son of the opera – but also its modern evolution – to invent the “song form” as we still practice it today. It is also in this repertoire that the figure “of the interpreter” is noted over that of the “singer”: the operatic singing, however virtuous and noble, however technically valuable, is no longer exhaustive, it is necessary that the singer enters the poet’s verses and makes them his to make them relive every time. Inspired by the stylistic dictates of the period, the formation in duo “voice and piano”, typical in the “periodicals”, meetings of the privileged in cultural circles and in patrician houses to listen to the music of art. Only Eduardo’s accordion will be an exception, the instrument that has always inspired his singing. The talented and international piano of Julian Oliver Mazzariello accompanies this magical journey. A precious musical tribute that wants to give us back the authentic spirit of that time in all its unsurpassed modernity, which wants to free some pearls of this repertoire from the crusts of time, from inappropriate contaminations, to restore them to the timelessness of the classics.
Introduces to heed, Federico Vacalebre, journalist, music critic, film and theater author, Neapolitan. A wise guide in the musical, cultural, but also historical, political and social moods that determined the glory and the fall of an artistic phenomenon that still identifies, together with the Opera, Italian music in the world.

Eduardo De Crescenzo represents “the voice”, absolutely among the most appreciated on the Italian music scene, famously by extension, but even more, for an amazing charge of harmonics that allows him to naturally draw every human mood. Exciting singer and performer, musician and inspired accordionist, he refines his talents over time, blends them in a personal and original style. It is difficult to place it under the usual “gender labels”. In his sound world there are a thousand nuances: the poetic interpretations of the Italian and Neapolitan chansonniers that at the beginning of the 20th century were inspired by French existentialism, the tight rhythm of the scat vocalization that he discovered in his adolescence in the American clubs on the port of Naples where jazz was played in the evening, the suggestions of the Mediterranean that inspire him from the sea or the alleys of his city. Neapolitan, during his long career, has been able to reflect an image of value of his territory, consistently impersonating a poetic Naples, cultured, living with commitment, intense in feeling but far from any folkloric representation. His music spans time, fashions and generations with unusual freshness; it captures a demanding audience educated in reading virtue but also an audience that lets itself be carried away by the instinctive thrill that its expressive power manages to infiltrate under the skin of the listener.

Julian Oliver Mazzariello is one of the most enchanting pianists who have appeared on the music scene in recent years. It amazes with its agile and virtuous touch, excited by the refined, vibrant, inspired phrasing. Born in England in 1978, where he studied classical piano, he moved to Italy little more than a teenager to learn about other cultures. Here he will meet the great jazz musicians of the national and international scene but will also look for experiences with the valuable songwriting to work on the emotional aspects of the interpretation. It is in this artistic and life path that the voice of his piano will become increasingly expressive and original, recognizable with every performance, whether in “solo” or in “formation”.